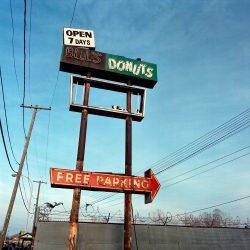 Am I a cynic, or am I a realist? Maybe I’m both. Yesterday, shortly after posting my, admittedly, rant filled proclamation of how I’d left Metro Detroit, I got a comment stating that I was contributing to the exact thing I detested about the area. I claimed that “Metro Detroit area is a black hole of despair and self-pity, and full of people who refuse to acknowledge, or can’t see, the basic problems…” I think the main point I wanted to make was that people refuse to acknowledge the underlying problems. It’s not that Detroit sucks. It does. It’s not that Detroit’s dangerous. It is. It’s not that the city lacks basic services. It does. And it’s not that the area is almost entirely reliant on a dying industry. It is. It’s that no one wants to make the necessary changes. They want to go on with their lives as if the same old rules apply today that applied in Metro Detroit’s hey day.

The whole state needs to invest in the future. Michigan wants to provide money to companies to start up in Michigan, but they put a limit on what industries they can be in. Michigan needs to encourage any viable business to start up in Michigan. Michigan, and Metro Detroit in particular needs to realize they are in competition for the 18-35 demographics, with cities like Chicago, New York, San Francisco, Washington, D.C., etc. If you are a highly educated 18-35 year old, looking for a great place to live, and begin, or develop your career or business, why would you choose Metro Detroit? There are very few reasons. One of the few reasons to head to, or stay in, Michigan is for the automotive industry. Unfortunately Michigan’s lock on the auto industry is slipping. Southern California’s quickly becoming the new car design center, and other states have a lower per worker cost than Michigan for manufacturing. With a global economy there are many fewer reasons to locate your automotive company in Michigan. Even the big three are seeing more growth outside our country than in. One less reason to expand in Michigan.

So what does Michigan do to invest in the future, and attract highly educated and highly skilled workers? Not much. Michigan spends more on prisons than on education. Which of these two things will help Michigan to prepare for the future? Maybe Michigan can become the “Prison State,” and house prisoners from around the country. That’s sure to attract the kind of people Michigan needs. I continue to hear on the street, and on t.v., and on the radio, calls from the citizens to their politicians, to bring a big corporation in to Michigan to save the day. It’s not going to happen. Why? Why go to Michigan, when the people you need for your big corporation to be competitive are leaving in droves? What Michigan needs to do is invest in, and encourage, entrepreneurial activity. Everyone likes to point to companies like Google, and say that we need to bring a company like that to Michigan. Of course not to long ago Google was a two person start up. Google not going to relocate to Michigan. They may bring a few thousand jobs, but that’s small consolation considering the enormous job losses Michigan has had in the past five years.

The second thing Michigan needs to do is invest in the quality of life. Yes, there are beautiful things and places in Michigan, but compare Metro Detroit to other major cities around the country. Detroit’s got an amazing asset in Belle Isle, but head out to Belle Isle on a week day evening and marvel at the burned out buildings, or the trash in the parking lots. Portland, Seattle, San Fransisco, Chicago, New York, and D.C., all have incredible public assets, that attract the kind of people that Michigan needs. Parks, museums, culture, and public transportation (Seattle’s just so, so) , are all things that are neglected in Michigan as being frivolous, non-essential, expenditures, when the reality is these are the things that the very people Michigan is losing, and failing to attract, want to have access to. It’s relatively easy to move around our country, and that makes all major metropolitan areas in competition for the same highly prized workers, entrepreneurs, and businesses.

Trying to attract a business to Michigan is no easy task. As I mentioned before, why would anyone relocate their business to Michigan? There are very few reasons to do so. Tax policies alone are usually not enough. Relocating a business can be very expensive, and many things must be taken into account when making the decision. Will your workers relocate as well? If not, does the area you’re looking at have enough of the workers you need? What’s the quality of life like where you are considering moving the business to? Business owners generally have to live in the area as well.

So, the question is, am I a cynic, a realist or both? I guess I’m both. I’m very realistic in my assessment of Metro Detroit. I’m also cynical about the chances of any kind of turn around any time soon. When politicians like L. Brooks Patterson make statements like, “I love sprawl. I need it. I promote it. Oakland County can’t get enough of it” or “we can’t afford to spend a dime on an experiment like mass transit…” it’s hard not to be. L Brooks Patterson also cut funding to Ferndale’s downtown (one of the few to make an incredible turn around in Michigan) because he didn’t like their position on his spending on roads and views on suburban sprawl. Suburban sprawl is questionable in good times, but now that the population is declining, and sprawl has been encouraged (and achieved), how is the infrastructure going to be maintained? How’s it going to be paid for? And by whom?

Long commutes, crumbling infrastructure, a lack of cultural resources, no mass transit, an over reliance on a single industry, and barely a plan in place to do anything about any of it. Sure there are plenty of individuals, and non-profit groups working to change things, but it takes real political might, and plenty of dollars to enact so much as a plan. Even an investigation into what Michigan needs (if it’s not obvious enough already) would be a start.

When the collective attitudes, and desires change, and the politicians of Michigan start to push for change, maybe things will change, and if it’s not to late, maybe some of us will come back.

[…] knows about Detroit’s problems, and by the looks of things, the entire state is in big trouble. Detroit is not alone, however, and […]