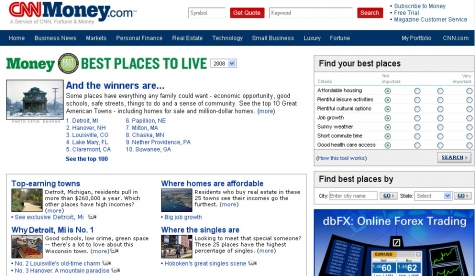 Well Money Magazine came out with their best places to live a little early this year, and lo and behold, Detroit finally came out on top! Managing editor, Eric Schurenberg, stated that while Detroit’s top ranking may surprise some, or actually everyone, it’s actually about time Detroit’s great economic potential, and low housing prices, combined with a top notch educational system, city services, and healthy lifestyle were recognized by the industry leading publication.

The responses on the streets were mixed. Some always knew Detroit was the best place to live. Northwest Detroit resident, Scott Smarthers, said, “I’ve always loved Detroit, but it’s gotten such a bad rap in the media. Everyone thinks it’s a bad place.”, stated Scott Smarthers, as he installed three of The Club, anti theft devices, and armed his cars security system, in front of his Northwest Detroit home.

With residences going for as low as $1300, the nations worst unemployment, and what has been called a “one state recession” going on for several years, many area residents feel the area has nowhere to go but up. A resident named Christine, but who failed to give a last name, said, “with our low cost of living, and our highly regarded mayor, who really knows how to lead, we’re just about to be discovered.”